Pain on the outside of the knee is known as lateral knee pain. Here we outline the most common injuries and causes of outer knee pain.

Chronic knee pain develops gradually over time through overuse, or following an acute injury which has not healed properly.

One of the most common causes of pain on the outside of the knee is Iliotibial band syndrome. It is also known as Iliotibial band friction syndrome (ITBFS) or runners knee and is common in runners, cyclists and soldiers. Symptoms consist of:

A lateral meniscus tear is an injury to the cartilage meniscus. These are semi circular discs found in the joint. A torn meniscus can be a sudden onset, acute knee injury, or it can develop gradually from wear and tear. Symptoms include:

A lateral ligament sprain is a knee injury involving a tear to the ligament on the outside of the knee. Symptoms include:

Patellofemoral Pain Syndrome (PFPS) is better known for causing pain at the front of your knee and around your patella (kneecap). It occurs when the patella is out of alignment and rubs on the femur bone underneath. Symptoms include:

Osteoarthritis is wear and tear of the knee joint. This results in degeneration of cartilage which lines and protects the ends of your bones. Eventually the bone will begin to wear away. Symptoms include:

Biceps femoris tendonitis is inflammation or degeneration of the hamstring tendon at the point where it inserts into the back of the knee. Symptoms include:

Pain on the outside of the knee may result from injuries and problems elsewhere in the body, particularly sciatic pain from the lower back and hip.

The following injuries are common causes of acute lateral knee pain. You will be aware of a specific point in time when your injury occured.

A lateral meniscus tear is an injury to the cartilage meniscus. These are semi circular discs found in the joint. A torn meniscus can be a sudden onset, acute knee injury, or it can develop gradually from wear and tear. Symptoms include:

A lateral ligament sprain is a knee injury involving a tear to the ligament on the outside of the knee. Symptoms include:

The tibiofibular joint is the point in the knee where the tops of the shin bones (tibia and fibula) join. Dislocation of this joint is likely to have been caused by an impact or fall onto the knee, particularly when it is in a fully bent position. Symptoms include:

Important: Causes of lateral knee pain not to be missed:

Although these are not paticularly common causes of pain on the outside of the knee, more serious complications may occur if they are missed and go untreated.

Peroneal nerve injury is caused by a direct impact to the outside of the knee which damages the peroneal nerve.

Symptoms which might distinguish a Peroneal nerve injury from a straightforward contusion include numbness or tingling in the front or side of the lower leg.

As a result the patient will also have weakness lifting the foot up, and in severe cases, a sign known as ‘foot drop‘ will occur. A patient with foot drop will be unable to lift the foot up properly when walking and may tend to drag the toes.

A Slipped capital femoral epiphysis is a hip injury more common in boys aged 11 to 16 years old. The head of the femur slips away gradually from the rest of the bone causing hip pain, which may radiate to the outside of the knee.

Perthes’ disease is a hip condition which affects children, most commonly aged between four and eight. Symptoms of tiredness and groin pain are common and the patient may also have a noticeable limp.

If Perthes’ disease is suspected then seek medical advice as soon as possible because early intervention is necessary to prevent future problems.

We also have a number of strapping & taping tutorials:

A cold therapy and compression wrap is essential first aid. It reduces pain and swelling and can also be used to apply heat later in the rehabilitation program.

Resistance bands are important for most sports rehabilitation and enable you to exercise any muscle from the comfort of your own home.

A foam roller is an excellent piece of kit which can be used in place of massage to treat calf injuries. They are also excellent when use regularly as part of your warm up to help prevent future injury and improve performance.

A hinged knee brace protects the joint and helps reduce any swelling. It has solid metal supports down the sides to prevent sideways movement of the joint. Grade 2 or 3 injuries may require a limited motion hinged knee brace. 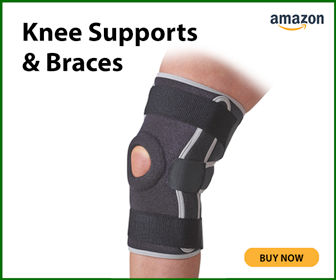