Select the type or location of wrist pain:

Sudden onset injuries or acute injuries include wrist fractures, sprains, strains, and contusions. If you suspect you have a wrist fracture, seek medical advice immediately.

Wrist fracture – (broken wrist) is a fracture or break of either the radius and/or ulna forearm bones. Or any of the smaller carpal bones in the wrist. There are a number of different types of wrist fractures, so an accurate diagnosis is essential.

Colles fracture – is a particular type of broken wrist. It involves a break of the radius (forearm bone), on the thumb side of the wrist. Symptoms consist of severe pain, swelling and deformity would indicate a possible Colles fracture. It is most often caused by a fall.

Scaphoid fracture – the scaphoid is one of the small group of bones in the wrist called the carpal bones. It is the most common carpal bone to fracture among athletes. It is often caused by falling onto an outstretched hand. Wrist pain and weakness gripping things are symptoms of a scaphoid fracture.

Wrist strain – is often a general term used to describe pain in the wrist. Strictly speaking, a strain is a tear of a tendon which attaches muscle to bone. Wrist strains can occur suddenly, or develop gradually through overuse.

Wrist sprain – is an injury to any of the ligaments which connect bone to bone in the wrist. It is a common wrist injury, usually caused by a significant impact like a fall. There are different grades of a sprain, depending on their severity.

TFCC tear – is an injury to the triangular fibrocartilage complex, found in the wrist, between the end of the ulna bone and the carpals. A tear can be caused by a specific incident or come on gradually, resulting in wrist pain and restricted wrist and hand function. This wrist injury can often be treated with a splint, although if it is too severe, surgery may be needed.

Gradual onset injuries or chronic injuries occur over a period of time and often cannot be traced back to a single incident or cause. The most common structure injured are the tendons of the wrist through overuse or repetitive strain.

Wrist tendonitis – is inflammation, or more likely degeneration, of any of the flexor or extensor tendons which cross the wrist joint. Repetitive movement and overuse can cause stiffness and pain in the wrist, and there can also be swelling. Sports and repetitive work are common causes of tendonitis.

Carpal tunnel syndrome – is a common cause of wrist pain. A dull ache is felt in the wrist and forearm with pain which may radiate into the hand and fingers. It is often worse at night and a tingling sensation can be felt. We explain the symptoms, causes, and treatment including exercises and surgery.

RSI (repetitive strain injury) – is a general term rather than a specific diagnosis used to describe gradual onset pain usually in the forearm, wrist, and hand. RSI is a term that covers several different causes of wrist pain, but all are exacerbated by certain repetitive movements, whether they’re from sport or from work.

Ganglion cyst – or wrist ganglion is a small lump which appears in the wrist, often attached to a ligament. The size of the cyst and the severity of the wrist pain varies from person to person. Some ganglions are not painful so can be left, but others can hinder movement and cause pain, so may require treatment. Read more about the causes, symptoms and possible treatments for ganglions.

Wrist bursitis – a bursa is a small sack of fluid that lubricates where tendons move in joints, of which there are two in the wrist. If a bursa is subjected to repeated trauma or friction then it can become inflamed and swollen, causing wrist pain. Although the pain can be severe, wrist bursitis can often go away with rest, ice and compression, without the need for any major treatment.

De Quervain’s Tenosynovitis – is inflammation of the synovium or sheath that surrounds two tendons in the wrist which attach to the base of the thumb. It is a form of repetitive strain injury which can be exacerbated by sporting and work activities. The inflammation can cause pain and restrict movement in the wrist, but in most cases, it can be treated without surgery. 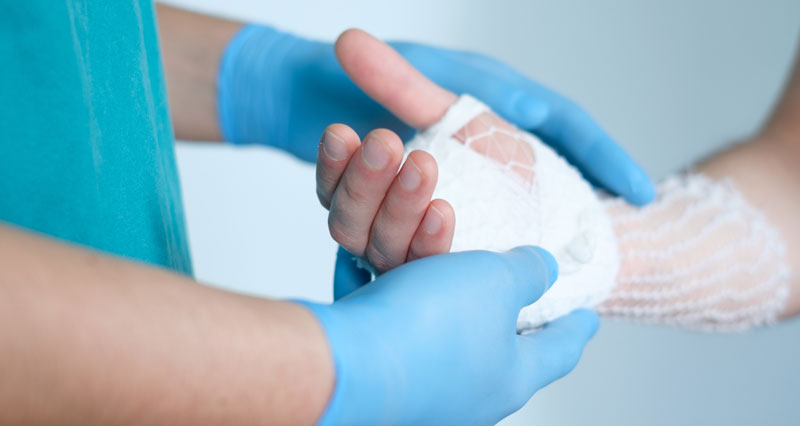 Do I Need Urgent Wrist Surgery?

Wrist surgery is usually only indicated after conservative (non surgical) treatment has failed. For amateur athletes this is usually the best course of action. However…
Read More 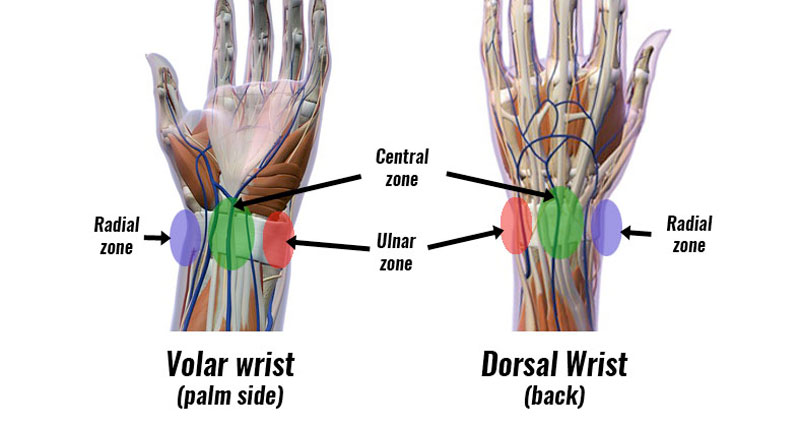 Here we explain the common and less common causes of wrist pain by specific location or area. Is your pain at the front or back…
Read More 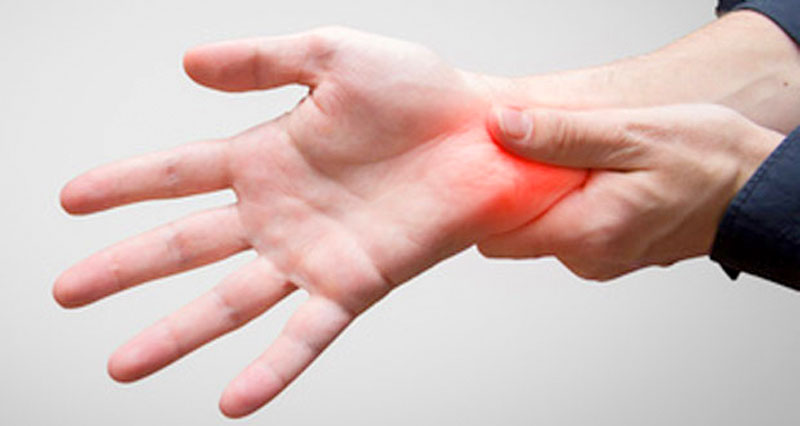 Wrist taping or strapping is a great way to provide extra support when recovering from injury. Or it is also used to help prevent wrist…
Read More 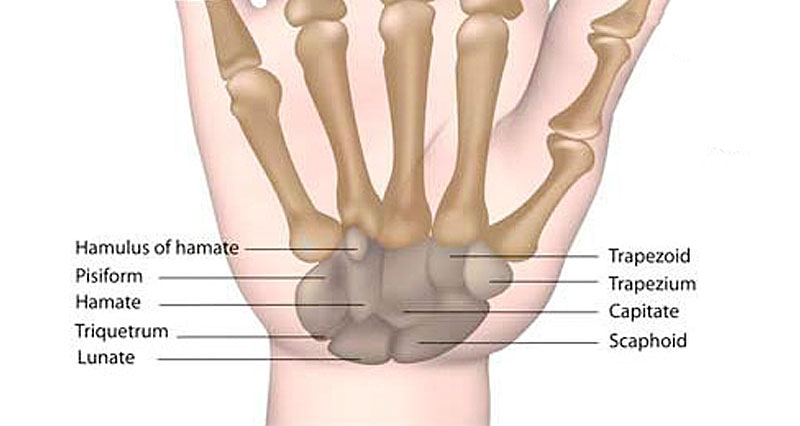 Wrist anatomy is the study of the bones, ligaments and other structures in the wrist. The wrist joint is a complex joint which connects the…
Read More 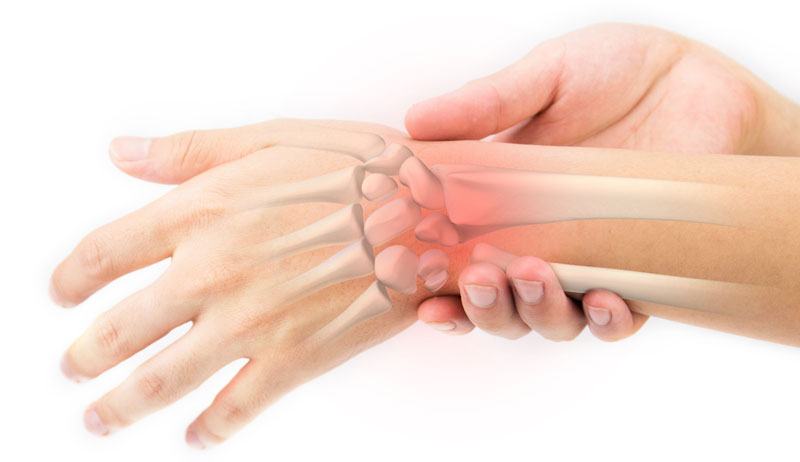 Sudden onset injuries or acute injuries include wrist fractures, sprains, strains, and contusions. If a broken bone (fracture) is suspected, then seek medical advice immediately.…
Read More
This article has been written with reference to the bibliography.

Mike is creator & CEO of Sportsinjuryclinic.net. A qualified Sports Injury Therapist with a degree in Physical Education, Sports Science and Physics, and a Postgraduate Certificate in Education.